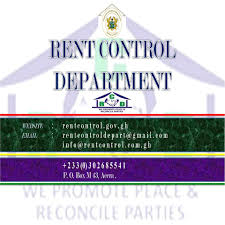 The Rent Control Department has vowed to crack the whip on Landlords who are charging beyond the Six months rent advanced permitted by the Rent Act.

This is after it emerged that 72% of tenants in Ghana are finding difficulty in settling their lease due to exhorbitant fees charged by these house owners.

Public Relations Officer of the Rent Control Department Emmanuel Hovey Kporsu says such Landlords could be fined GHC6,000 or go to jail for 2 years.

“About 72% of cases we have had is about tenants unable to pay their rent advance. Any person who demands more than 6 months advance rent shall be guilty of an offence and be liable to a fine not exceeding GHC6000 or a term of imprisonment not exceeding two years”

Per the current laws governing the rent, ACT 1963, tenants are to only pay between one to six months advance rent.

But the law is not enforced as it should. This has led to some landlords demanding more than 12 months as a rent downpayment, exceeding the six-month ceiling.

The Rent Control Office has also indicated that the government is putting together a new rent Bill.

Mr Boakye who appeared before the Appointment Committee on February 24, 2021, for his vetting said the new law will make it possible for landlords to charge only one-year advance rent.

According to him, it is not practical for the current law that states that house owners can charge up to six months advance rent to be enforced.