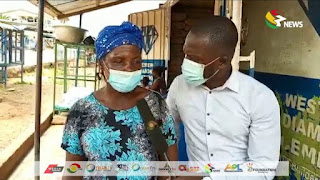 The announced arrest by the Ghana Police Service on Thursday, September 23 over the alleged kidnapping of supposed nine-month pregnant Josephine Panyin Mensah involved her husband and her mother, 3news.com has gathered.

Confirming the arrest to Media General‘s Eric Mawuena Egbeta in an interview on Thursday, Aide to the Western Region Minister Justice Acquah said Michael Simmons and his mother-in-law were picked up because there is suspicion of a staged kidnapping incident.

“Because it was a syndicate. It was well planned. One person cannot stage a kidnap. He had accomplice who helped in ensuring that they carry out their ideas successfully.”

There have been several twists and turns to the story following the location of Madam Josephine Panyin Mensah at Tolanu, a suburb of Axim, on Tuesday, September 21.

Her disappearance after a dawn walk was officially reported to the police on Friday, September 17 by her husband, forcing the police to issue an alert.

But when she was found, her pregnancy was no more.

The Western Region Minister, Kwabena Otchere Darko Mensah, had told Kumasi-based Kessben FM that his briefing from the National Security suggested that there was no pregnancy.

This was, however, challenged by the family and residents of Takoradi suburb Columbia, where the couple live.

Meanwhile, Madam Josephine, who has now been declared a suspect, has been transferred to the Effi Nkwanta Regional Hospital for another round of medical examination over her pregnancy claims.