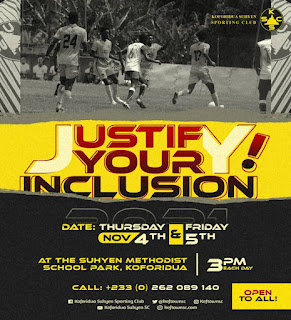 Division II side Koforidua Suhyen Sporting Club is calling members of the general public for a justify your inclusion exercise ahead of the new season.

The club which is based in Suhyen in the Eastern Region has reserved two days for the exercise slated for the Suhyen Methodist School Park in Koforidua.

The exercise will begin on Thursday November 4th and finish on Friday 5th November, 2021 at 3PM each day.

KSSC competed in the division II league in the Eastern Region where they emerged from Zone A with an unbeaten record and subsequently played in the middle-league.

The club however lost their hard earned spot in the middle-league finals after a protest brought against one of their opponents got a favorable outcome.

The club has a result lost an array of talents to clubs within and outside the shores of Ghana and seek to use this opportunity to unearth talents and give them the platform to thrive.

In March 2020, following a successful majority stake acquisition by a consortium, Bingy FC was renamed Koforidua Suhyen Sporting Club (KSSC) with the Chief of the Suhyen Traditional Area, Okogyeman Nana Ankoma Basapon honored as the Life Patron of the club.

Under the new ownership, with a newly formed board, the club was restructured with a commitment to providing an enjoyable, challenging and educational experience for members in the community with interest in learning and growing through the involvement in sports.