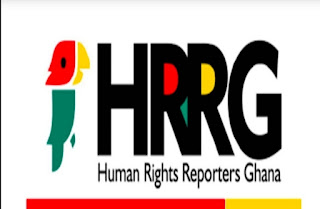 The human rights advocacy group outrightly joins scores of Ghanaians and civil society organizations in condemning this very uncivil act of sexual predatory from an officer who is entrusted with the responsibility of protecting the victim from such a despicable and shameful act.

In the same vein, HRRG whose sole aim is ensuring the protection of rights of women, girls, children and minority groups in Ghana and beyond from violation of human rights commends, the police service for conducting a preliminary investigation into the matter and swiftly apprehending one of their own for the misconduct.

This singular act is a further departure from the convention of citizens meted out with abuse by agents of our security apparatus with impunity which often go unpunished.

This sheer expression of masculinity by the disgraced officer in misapplying the power granted him by the state, we say is an affront to Article 5 of the Universal Declaration of Human Rights which stipulates, 'No one shall be subjected to torture or to cruel, inhuman or degrading treatment or punishment.'

The 1992 Constitution under Chapter 5 Cl 15 calls for same and seeks to protect the human dignity of the Ghanaian citizen especially our women and girls. We look forward to the law in relation to sexual harassment being applied to the latter.

HRRG urges all citizens to join in the fight against violations of human rights importantly the state authorities by appropriately using their communication gadgets like smartphones or cameras to discreetly record and share all forms of right abuses to raise awareness and rid of miscreants in the reputable security services.

To the victim and family, we express regret at this unfortunate incident and ask them to keep the faith as we hope for proper prosecution of this case.

We believe a nation that disregards the dignity of its women and girls is only heading for destruction and we must all desire to treat and accord such, the needed security and respect. 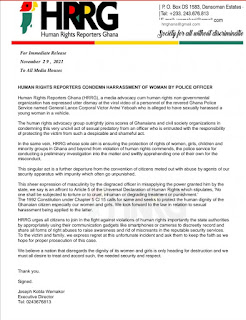