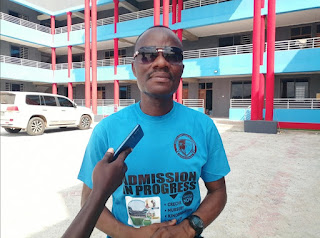 The Founder of the Noble Captains Academy, Mr. Alex Obu-Simpson has decried the difficulties most private investors are faced for creating private business(es) without tax incentive and support from the government to propel them for growth. According to him, granting tax exemptions at the birth of such business venture to private investors by the government can serve as a great relief and a source of motivation towards successful execution of the business.

He has therefore appealed to the government to consider awarding some level of tax exemptions to local such start-ups, to enable have the strong foundation to provide employment opportunities in the communities.

“The joy is not to recoup the investment but to give back to society and see children learning in a conducive environment like this. It is also to see children develop and grow in an environment which otherwise wouldn’t have been accessible to children in such communities. 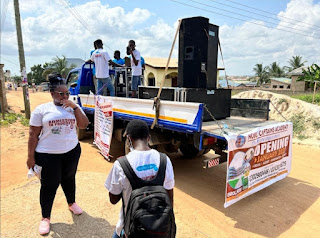 Mr. Obu-Simpson made this known in an interview with journalists on the sidelines of an enrolment drive conducted by his outfit on Friday 3 December 2021, to create awareness about the opening of a new school he built to support a community and his readiness to admit students and hire teachers and non-teaching to manage the school which will officially starting from in the next academic year, January 2022.

The event witnessed the school’s staff embark on a float; engaged the public, distributing flyers around Fetteh Kakraba, Mandela, Big Apple including the Kasoa Township and its adjoining communities situated within the Gomoa East District of the Central Region.

Noble Captains Academy (NCA) is a newly established private nursery and primary school which offers top class teaching and learning methods informed by best practices from the world in an exciting academic environment at an affordable price.

The school has recently announced admission for parents and guardians who may want to enroll their wards to study in a conducive environment under the tutelage of best pre-school tutors under various departments such as crèche, nursery, kindergarten and primary schools respectively, officially beginning in January 2021. The new school, a magnificent building, comprising 32 classrooms is located near the new market within the Fetteh Kakraba community. 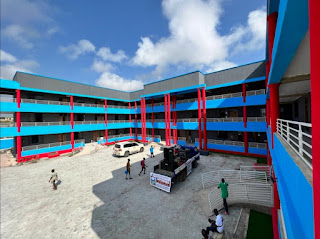 Outlining the future plan of the school which would help boost education in the area, he said: “We are currently seeking to admit a population of 750 children to fill the school building. That would be from class 1 to class 6 pupils”. He further noted: “We have a special structure coming up behind the main block for JHS 1 to 3 classes. For now, it will be pre-school, lower primary and primary school we are enrolling today under the GES curriculum. “Junior High School (JHS) would come next academic year when we have adequately prepared our own students and organize them for the B.E.C E.”

The objective is also to recruit over 50 teaching and non-teaching staff from the community to effectively manage the school which will ultimately assist in reducing the unemployment rate in the country.

Touching on the rationale behind the establishment of the school, the Founder who doubles as Director of the school, Mr. Alex Obu-Simpson explained the desire was borne out of realization that public schools in the community lack the required quality teaching and learning standards to meet the educational needs of parents, guardians and children.

“Even though there are other schools around, children are seen on daily basis travelling several hours to and from the community to school in Accra and other adjourning suburbs because of the quality they are looking for”.

“Noble Captains Academy has therefore come to provide the quality and standard the community was looking for to give them impetus and advantage for the future. According to him, the school prepares students for meaningful lives and active participation in the immediate, national and global community.

“We facilitate quality teaching and learning with our wide range of resources, to ensure that each student reaches his/her peak of excellence with a firm belief that all students would be successful and should not underestimate what they can achieve at any age”.

For his part, Mr. Moses Antwi Amoamah, the School’s Principal disclosed all is set for serious teaching and learning work to begin, adding, “the future begins here”.

He therefore called on parents and guardians within Fetteh Kakraba, Mandela and the adjoining communities located within the Gomoa East District not to hesitate in bringing their wards to be enrolled into the school.

Alex Obu-Simpson was trained at Komenda Training College for his Teachers’ Certificate “A”.

He obtained his First Degree in Education Psychology from the University of Cape Coast and a Postgraduate Degree in Industrial Relations & Human Resources Management from Keele University, United Kingdom.

He is a Certified Human Resources Manager (CHRM) from the Leoron Institute and holds a Professional Executive Masters in Alternative Dispute Resolution (PEM-ADR). He is a member of the Certified Institute of Human Resource Management (CIHRM) and Association for Talent and Development (ATD).

His humble career started as a teacher in the Basic School, he then continued to teach at the Secondary School.

As a man of faith himself, he believes that prayers are effective and that it is possible to change the destiny and future of our children but also believes strongly that as parents we should be prepared to invest in the life out our children through education for a better future.

From his humble background, Mr. Obu-Simpson believes that it took education to enable him emerge from the fishing community to become who he is today.

He was most likely to have ended up becoming a fisherman. The motivation to establish Noble Captains Academy is therefore to give back to the community a top-class education that will give children in the community an opportunity to adequately compete in an ever-changing and competitive world.