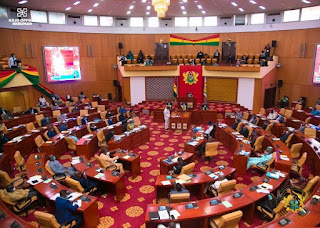 March is a month to forget. Aside all the good things that has come in the month, the cherry pickings of heritage stories, unexpressed cravings for Ghanaian culture and the numerous blessings including Ghana's qualification to World Cup in Qatar, March has also seen some of the devastating events of the year. A month that has seen the galloping of fuel prices, transport fares has barely been stable--hitting a record high in the 21st century, the free fall of the cedi, dipping of government's invisible hand into the pocket of Ghanaians and series of events led to the striking of bread producers and sellers in Wa.

Firstly, it started on a good note. A month a lot of people yearned to enjoy the benefit of a delayed salary of public sector workers. This comes as a result of an emptied national pockets, buttressed by the statement of Madam Frema Opare, the Hon. Chief of Staff of the Presidency that there are no funds to sponsor the National Independence Day Celebration. Truly so, some Circuits in Upper West had their preparations truncated a day to much anticipated 6th March. A day of National glory, day of political and economic independence had turned to a day of gloom.

A first indication of economic crisis further fuelled by the Russo-Ukraine broken Diplomacy. A ripple effect was felt in goods and services in Ghana, banks and microfinace institutions, markets and roadsides, and digital and physicak pockets. Prices of goods and services took center stage. It started sprinting at Usain Bolt speed. Even though prices of commodities were sprinting everywhere in the country, one basic good finds this increment difficult to implement unless they used other means in the Upper West Region. Paanoo (bread), as called in Wa. This is where the woes of bread crisis started in Wa.

It was one evening when the rumours started. The news of the bread bakers and sellers association of Wa hit the whole town like a meteorite. The patrons weren't prepared when the strike came into full force. People of good will has began combing the whole town for a piece of bread to have their morning breakfast or evening meal or tea and bread. The whole town was full, searching from roadside shops to the bakeries, tea joints at the Wa lorry park, to unthinkable corners of town. A coverage of a national TV further consolidated the challenges patrons of bread faces while also forecasting the concerns of the producers of bread to the nation.

It was during this outburst that some patrons of bread accused DC Asamani and the famous wealthy man called "By the Power" of introducing bread in the Wa community and it environs. Before he brought his giant flour machines that turned and twisted bread flour into eatable commodity, bread was only a gift given to indigenes from those who were returning from Techiman, Kumasi, or Accra. The famous Nkawkaw bread cannot be downplayed. My family was one of the privileged few who enjoyed bread often; my mum, who used to travel actively to Nkawkaw never returned to Wa without loaves of bread in her company.

Whenever she returned, it was always a day of picnicking in our house as many people--both young and old--throng to have their share of the loaves of bread from the Southern part of Ghana. More appreciated was the multicoloured breads or ones with designs around it. I could still remember the mumble sounds, the grims accompanying heavy steps on one of these days when my mum couldn't bring bread from her Nkawkaw journey because there was a purported shortage of flour in the Country. In summary, this was the level of luxury and prestige this commodity enjoyed in the early 1990s in Wa town.

Moreover, a memento of the dying piece of Kumasi "Paanoo" is still lingering in the end corner of my father's room; a mini cabinet. This is where the bread received as a gift from people returning from Kumasi to my father were kept. Its top floor was where the bread will experience the touch of a sharp knife, piercing it into manageable piece after piece depending on your rank amongst the siblings until the last piece was taken by one of my siblings. I particularly used to enjoy the ones with a lot of colors even though I used to wonder how this magic was done on these bread. However, I disliked it when I began frequenting Kumasi, Accra and their surroundings.

Prior to the surge in the production of bread in Uoper West, particularly Wa, the community had only known the delicious Kokoo of varous types (Hausa kokoo, Dagbamba Kokoo, Moli Kokoo, brown Kokoo, and normal Wa Kokoo) and Kakolo (made from millet) or Kose or Pincaso. Kokoo was prepared in almost every home in the mornings. The few homes that didn't prepare kokoo buys from the public joints which was normally Hausa Kokoo or Dagbamba Kokoo. However, bread had come to replace the known morning breakfast in almost every home in Wa. Gradually replacing it with tea and bread. The few that still takes Kokoo, buys from outside and it is taking mostly with bread.

Things are quite different now from those times. Bread has become a necessity in  almost every home despite the presence of alternatives. These alternatives are Koose, bofrot, kakolo, pincaso etc. Yet many still considers bread as the ultimate when it comes to tea or kokoo. Just like how bread had come to successfully takeover the juicy place of kokoo in Wa, so has democracy taken over the ambits of dictatorial leadership in Ghana. The current difficulties faced under the leadership of His Excellency, Nana Akuffo Addo has placed the month of March as one of the worst economic months in the Fourth Republic.

Unlike the bread producers who used strike to increase prices in their commodity, other pertinent goods and services other commodities just increased their prices arbitrarily (excluding those on exhaustive profiteering mission) to meet the prevailing economic situations in the country. Unlike the striking bread producers in Wa who hide under the void created by the necessity of the commodity to increase prices, they could've gone ahead to increase it because bread has become a basic necessity in Wa like all other basic necessities.

For instance, Fuel prices needs no permission or any strike to increase its prices. It just skyrocketed despite the warnings of various serious minded Ghanaians who chastised the government and agencies responsible but that did not deter it from skyrocketing. Also, another basic necessity that has break the famous eight religiously championed since 2021 was the Ghana Cedi. It was in the same month of March that the Ghanaian Cedi has broken the Eight against the Dollar. It has caused the hike in prices of goods and service in Ghana.

After the political difficulties, economic hash realities and cultural confusion unleashed on Ghanaians, the Nana Addo led government admitted to these unbearable conditions in the State of Nation Address (SONA) delivered in same month of March. This, the populace had recalled a taste of Mahama led government with anxious excitement over the Nana Addo led government. Hence the return of Mahama will be regarded with same taste as the vulnerable patrons who had taken a sharp 'U' turn for bread for the first time since the producers went on strike vis-a-vis increased prices.

The familiar taste, a known feeling which has been used to in the consumption will be chased after once again albeit missing; it will give a different feeling akin to the high price and reduced standard as a result of the pricing in raw materials. A chime of a warning bells. Consumption of bread might never be the same again after what has happened. It gives a different sensation, newer tastes as always compared with the taste before the break. This has always been natural laws of expectations and taste. Original taste of bread is gone. Lets embrace the new norm as we closed an enigmatic month.