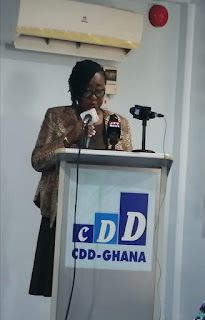 The Convener of the Affirmative Action Bill Coalition, (AA Bill), Sheila Minkah-Premo has taken a swipe at parliament for the excessive delay in passage of the affirmative action bill into law insisting that its members including cabinet has no moral justification to further withhold the bill but to simply proceed and expedite the necessary action that could lead to its immediate passage into law.

She maintains that: “the article 17 of the Ghanaian constitution unequivocally states that nothing in this part shall prevent parliament from enacting laws that are reasonably necessary to provide for the implementation of policies and programs aimed at redressing social, economic and educational imbalance in the Ghanaian society”.

The forum which was staged at the CDD-Ghana conference room in Accra on Tuesday June 21, 2021 brought together stakeholders made up of representatives of various civil society organizations, gender advocates, and the academia including some media personalities alike.

It was an avenue where various calls were made by stakeholders and the participants alike on the need to press home demands and actions to be taken that can lead to the urgent passage of the AA bill into law.

The Affirmative Action Bill is designed to help emulate gender inequalities based on the principle that each citizen shall have equal rights to solve problems. It entrusted each man and woman with equal abilities and should have equal opportunities.

It also seeks to encourage efforts towards addressing socio-cultural, political, economic, and educational gender imbalances in private and public sectors in accordance with Clause 4 of Article 17 of the 1992 Constitution.

According to the AA Bill Coalition Convener, the Bill has suffered excessive delay in cabinet over the years as a result of discrimination on part of the stakeholders hence the loss of interest to push the bill into parliament for consideration and passage into law.

“So one of the things we stand on to make a push for this law is that a lot of research has go on and we’ve found out that there’s a lot of discrimination against women socially, economically and educationally so it’s time for parliament to enact this law”.

Adding his voice to calls, the Director of Advocacy and Policy Engagement at CDD-Ghana, Dr Kojo Asante stressed the need to for champions to be built in and outside parliament who can take up the bold initiative to help push the bill from cabinet to the floor of parliament to ease the passage of the Affirmative Action Bill into law in no time.

According to him, the bill should be given utmost care and attention that it deserves owing to its importance of ensuring inclusion and diversity towards building a fairer society for all to thrive.

While calling for sustained advocacy towards the speedy passage of the bill into law, he quickly appealed for more stakeholders, individuals and organizations to join the Affirmative Action Bill Coalition to help contribute their quota meaningfully to the realization of its objectives.

For her part, Broadcast Journalist at Joy News, Emefa Appau underscored the role of the media in leading the advocacy as a key towards realization of speedy passage of the AA bill into law.

But insists its practitioner’s capacities ought to be well built on issues regarding the bill so as to be well informed, ask the right questions and be ready to take up the lead role in advocacy to make a change.

“I’m of the view that the media has the power to avert excessive delays in the passage of the affirmative action bill but that power can only be fully utilized or unleashed if the media understands what the bill is and its importance especially to our society and how to make the society better, then we can bring it to the front burner and lead the advocacy”.

Founder and Convener of the Alliance for Women in Media Africa, Ms. Shamima Muslim, who chaired the roundtable discussion charges the youth to show their commitment and let their voices reflect in the Affirmative Action Bill which would soon be laid before the parliament to be passed into law.

She equally entreated media practitioners not to be seen as purveyors of news but endeavor to also take up advocacy roles on issues which affects the society to bring about needed change.