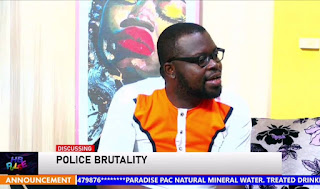 Mr. Wemakor contends that unless the police administration put its right foot forward to ensure their men in uniform are properly schooled on human rights in order to be armed to the teeth with the information, knowledge and skills required to work with, Ghanaians would continue to bear the brunt of the relentless brutalities and unprofessional conduct by some unscrupulous police officers against members of the public which put lives at risk.

In an interview with Victoria Beeko Danso, host of HB Pulse on Homebase TV, during the wee hours of yester when he appeared on the show to discuss on the topic: “Police Brutality” on Wednesday, October 5, 2022, the staunch human rights activist enlightened the public on the shortcomings of the Ghanaian police while citing a typical case of police brutality which his attention was recently drawn to, to buttress his point.

In the case which smacks of an assault perpetrated against two unarmed civilians as a result of unprofessional conduct exhibited by some police officers due to unwarranted arrest and detention without any official charges for wrongdoing.

One of the victim, 23-year-old, Richmond Amedey who assists his father with sales in his drinking bar near his residence located at  Dawhenya-Abbey near Prampram in the Greater Accra Region was allegedly picked up on the eve of Friday September 23, 2022 together with two other young men under a mysterious circumstance by the Devtracco Estate police patrol team.

According to the HRRG’s sources, the police officers numbering seven (7) who are members of the patrol team in the company of ACP Foli, their commander barged into the drinking spot on that fateful night at exactly 8:00pm where Richmond was on duty and without any formal introduction, interrupted the ongoing activities and commenced a search on anything they laid their hands on including opening bottles containing liquors meant for sale in a manner which demonstrates sheer unprofessionalism.

Some of these officers were alleged to have covered their faces with black masks in a bid to conceal their real identities which is uncalled-for.

They were not bothered to even ask of the whereabouts of the parents of the young bartender when thy barged into the spot, let’s alone keep them informed about their mission but went straight ahead to carry out their nefarious operation with show of bravado.

It was not clear what they might be looking out for which prompted the visitation and the quest for the unwarranted search. From the look in their faces, one could see that these men in uniform were on a target to hunt down someone upon a tipoff.

Unfortunately their search was conducted without a proof of a search warrant or any form of identification to indicate their intention.

Despite their eager search, it emerged that they could not find what they were actually looking for so they became frustrated, dejected and worried in the end.

They have therefore decided to make away with a jackpot machine (Chinese game) owned and operated by the drinking spot.

This, however did not go down well with Richmond therefore he protested to ask the officers the reason for action without any prior information.

It appears the action of the young man might have provoked the officers to unjustly pick him up and have him dragged into their waiting patrol vehicle where he was whisked away to the Devtracco Estate Police Station in company of two others who were picked along the road.

When he asked what his offence was, he was simply told to come and defend the jackpot machine upon visit to the station.

But upon reaching the police station, he was put straight behind bars together with one of his accomplice without even asked to defend the machine contrary to the assertion of the police prior to his arrest.

Fortunately, one of them (third person) was released instantly upon reaching the police station through the demands of an unknown phone caller on the pretext that he had developed a mental problem.

It wasn’t clear who that unknown caller might be and why he gave such an order for the immediate release of the boy which the  police  Commander complied with without any hesitation.

The long and short of it all was that Richmond Amedey and his colleague  spent 3 nights unjustly and unlawfully behind bars for no official charges of wrongdoing levelled against them  despite efforts by the Human Rights Reporters Ghana boss and his lawyer to get them released.

Mr. Wemakor observed that he got infuriated at the conduct of the police officers when the case was reported to him via a distress call during the wee hours of Saturday September 24, 2022.

He sought to intervene for the immediate release of the victims and requested for the contact details of the Devtracco Estate Police Commander, ACP Foli which he gladly received from the victim’s father, Godwin Amedey.

But his good efforts were thwarted by the police commander ACP Foli who ignored all his numerous phone calls.

“Upon receiving a distress call pertaining to this unfortunate incident, I did not hesitate to request for the contact number of Commander ACP Foli to intervene for the immediate release of the victims at all”.

“My calls went unanswered for three (3) consecutive times when I first placed a call to him upon receiving his contact. I later sent him a text message introducing myself and my intention of contacting with the hope that he might return my call but to no avail.

“I waited anxiously to hear from him but still no sign of his call therefore I initiated another call and then I was fortunate to hear him answer me.

I quickly introduced myself to him again and reminded him of my intention, but guess what instead of going ahead to confirm to me whether his men have truly arrested and detained the young men the night before when I demanded to know from him.

According to Mr Wemakor, ACP  Foli rather chose to ask him a question: “Are you interviewing me or asking me a question?”.

He wondered why a whole police commander would behave in such an unprofessional manner of asking his boys to go and unlawfully arrest and detain unarmed civilians for three (3) good nights without any charges of crime levelled against them.

The two (2) victims were later freed on Monday September 26, 2022 afternoon after unjustly spending 3 nights in the police custody but the controversies surrounding the entire case still persists with its challenges for the Human Rights Reporters Ghana (HRRG) to explore and unravel to name and shame these officers who misconducted themselves.

Unfortunately, Richmond Amedey (victim) could not tell his story when contacted on phone during the show due to technical challenges.

One question that remains in mind is that what could be the reason for the needles action taken by the Devtracco Estate police patrol team to arrest innocent civilians when it is clear that they have not committed any crime?.

Another question is why was 3 people (suspect) picked up and one person got released that same night at the police station while the other 2 were meant to spend 3 nights behind bars unjustly?

Surely, this show will uncover all the mysteries surrounding this saga and offer you more insights into the police brutality phenomenon in Ghana.

Don’t miss the next week edition of the HB Pulse on Homebase TV with your host, the talented and elegant Victoria Beeko Danso.

Watch a video on the discussion below: