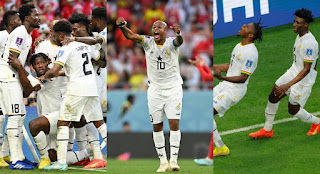 Ghana’s Black Stars dumped a 3-2 defeat to Portugal in the opening Group H game of the 2022 Qatar World Cup to beat South Korea 3-2 at the Education City Stadium.

Head Coach of the team, Otto Addo made three changes to the team that lost to Portugal, Tariq Lamptey came in for Alidu Seidu, Gideon Mensah came on for Baba Rahman and Jordan Ayew came on for Alexander Djiku.

There was also changes in the formation as Otto Addo deployed a 4-2-3-1 formation.

South Korea dominated the opening 20 minutes of the game but it was Ghana who broke the deadlock in the 24th minute through Mohammed Salisu. The Southampton center-back hammered in a loose ball from a Jordan Ayew free-kick.

Ten minutes later, Ghana scored once again to take a 2-0 lead into the break. Mohammed Kudus leapt high to head in a good crossing from Jordan Ayew.

South Korea returned from the break with added impetus and came close to pulling a goal back in the 53rd minute, Lawrence Ati-Zigi pulled off a good save to deny a header from Gue-sung Cho from entering inside the net.

Minutes after being denied by the goalkeeper, Gue-sung Cho scored two headers in the 58th and 61st minute respectively to make it 2-2.

The two quick goals didn’t bog Ghana team down as they found motivation to regain the lead in the 68th minute, Mohammed Kudus was at the right place to curl in a crossing from Gideon Mensah.

Despite late pressure from Korea, Ghana defended gallantly in the remaining minutes and 10 minutes of additional time to win 3-2.

The Black Stars will return to action on Friday, December 2 against Uruguay in the final game of the round.