The 2022 FIFA World cup is being hosted in Qatar. This makes it the first time a tournament world-class is being held in an Arab country and the second to be held in Asia after South Korea and Japan in 2002.

Qatar became the first host nation to lose an opening match in the world cup history. They lost 2-0 to Ecuador at the Al- Bayt stadium, Al Khor, on 20th November 2022.

As the tournament progressed, Qatar played against Senegal on their second match, and victory, for the second time eluded the Maroons.

In the 41st minute, Senegalese Forward, Boulaye Dia, gave his side the first goal. Seven minutes after, Famara Diedhiou also netted a goal to put the opposition in a disadvantage.

When the 78th minute arrived, Ghanaian-Qatari Forward, Mohammed Muntari tied one goal out of the two against his side making it a 2-1 score.

But the Maroons could not hold back the Teranga Lions as 22-year-old Bamba Dieng netted the third goal to secure their first 3 points after losing to the Netherlands. Thus by far, Qatar is still pointless.

On this, a Facebook user took to his handle to troll the Qataris. He wrote, "Qatar supposed to do it host and watch not host and play😂😂" 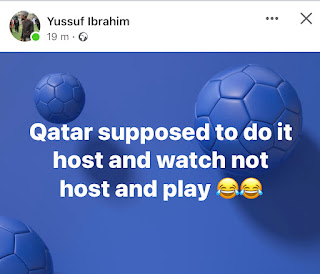 The Qatar world cup has been estimated at a cost of over $220 billion making it the most expensive world cup ever. It is expected to come to an end on December 18, 2022.
By Kandey Alhassan