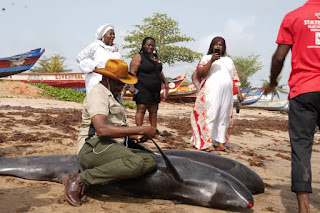 The Chair and leader of the Convention People’s Party (CPP), Nana Frimpoma Kumankuma has said the Daily Graphic has made a false publication on the rescue of the dolphins that appeared on the shores of Brawire in Nzema.

According to her, there’s a publication by the daily graphic that a team of experts from the Environmental Protection Agency (EPA) and the fisheries commission rescued and release about 38 Dolphins back to sea.

She revealed that the executives of the Convention People’s Party who at the time was in a convoy to meet the Chief of Brewire on a scheduled tour of abandoned projects and factories initiated by Dr Kwame Nkrumah in the Western Region.

Nana Frimpomaa with her executives quickly initiated a campaign to rescue the dolphins and save them from human consumption. She related that, these dolphins are recreational fishes of tourist interest and must be rescued when they go astray.

It took Nana Frimpomaa and her team 9 hours of tough negotiation and education to get the people to comprehend the need to join the rescue efforts. Finally the chair and leader decided to pay in cash all the fisher folks of Brawire who will return the dolphins to her. She payed 3000 dollars to rescue 40 dolphins who had already been sold to marketers nearby in truckloads and tricycles.

Nana Fripomaa finally got over 40 dolphins rescued and returned a  temporal location in the sea at 9pm.

She charged the Daily Graphic to pull down the false publication.

On the other hand, the chair and leader of the CPP, Nana Frimpomaa Kumakuma appealed to government and the fisheries ministry to call on all those who still have in possession some of the Dolphins to come for an amount of money as a way of stopping them from selling in the market. 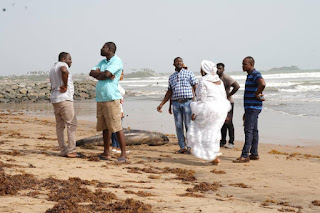 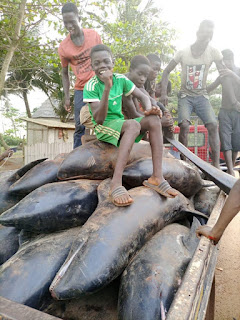