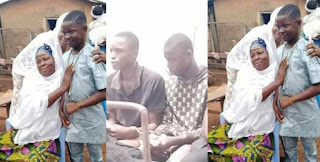 Charity Mensah, the traditional priestess who was arrested in connection with the murder of 11-year-old Ishmael Mensah has revealed that the two teenagers currently in police grips for their alleged involvement in the ritual killing contacted her on phone to be perpetually rich.

She said the two boys, who were only in touch with her via phone, requested for the “pocket no dry” charm.

Charity Mensah, made this known during police interrogation after her arrest earlier this week.

She was arrested alongside her errand boy, Desmond Nii Adjei, at Amanase near Suhum in the Eastern Region.

According to Citi News' reporter, she did not say whether she demanded a human body for the alleged rituals during interrogation.

“What they [teenagers] wanted was “pocket no dry” charm so that they will never lack money in their lives. According to information we picked up from the interrogations, she [priestess] told the boys that she could do it for them. There have been several phone interactions between one of the boys and the traditional priestess and the police have in their possession phone records of their conversations.”

“She is yet to confirm to the police that she directed them to bring human parts or a human being for the ritual,” Anass Seidu said.

The two teenagers still in police custody over the killing –Felix Nyarko and Nicholas Kini –have also alleged that the priestess was aware of the killing and went ahead to instruct them to bury the body of the deceased.

During interrogations, they said the priestess assured them that she will visit the place later at night with some aides to collect the body of the deceased for the ritual.

Charity Mensah is yet to confirm or deny that allegation.

Meanwhile, the priestess said to be a Beninois and a 2-week-old nursing mother has been granted bail.

Her Ghanaian husband and herbalist is reported to have fled with their baby.