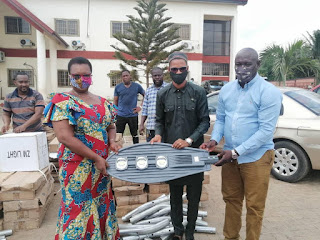 The Member of Parliament for the Madina constituency, Lawyer Francis Xavier Sosu has presented 250  streetlights worth thousands of Cedis to the La Nkwantanang Madina Municipal Assembly, to beef up security in the Municipality.

According to the MP, the installation of more streetlights in the Madina Municipality will help improve the security situation in the area.

Speaking at a ceremony held on April 14th in the Municipality,  the legislator expressed  hope that the lights will go a long way to assist the Assembly in beefing up security in the area, as well as helping to curb robberies and crimes in the market, lorry stations and other dark places that serve as hideouts for criminals.

Lawyer Sosu stressed on the need for the Assembly to use the streetlights for their intended purpose, in order to boost the confidence of the constituents, and pledged to support the assembly in all ways possible, to bring development to his constituency.

Receiving the items on behalf of the Assembly,  the Presiding Member, Braimah Ismailah Blay expressed gratitude to the MP and assured him that the items will be used for the intent for which they  were presented to the Assembly.

Other beneficiaries of the initiative included the Ghana Police Service, Municipal Health Directorate and the Municipal Educational Directorate.

Lawyer Francis Xavier-Sosu was accompanied by some Assembly Members and Constituency Executives of his party, the National Democratic Congress, (NDC).

Also present at the ceremony were the Director of  Health for the Assembly, Dr. Priscilla A. Siaw, and Angela F. Nkansah who represented  the Municipal Chief Executive, Jennifer Dede Ajabeng.