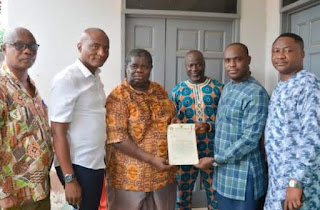 In a letter to the actor on Wednesday, he indicated that an amount of One Thousand Five Hundred Ghana Cedis (GHS 1500) will be given to Adjeteyfio every month till January 7, 2025.

That will be when his term as a Member of Parliament (MP) for Ayawaso Central ends.

Mr. Quarter’s directive has come two days after Vice President Mahamudu Bawumia donated GHS 50,000 to the actor for his rent and upkeep.

Psalm Adjeteyfio who is popularly known as TT from the rested Taxi Driver series has been trending since last week over his inability to pay his rent.

This was after an appeal to Ghanaians to support him raise an amount of GHS3000 for his rent in an interview with Step1 TV went viral.

Mr. Quartey’s donation was in response to a call by Ga Dangme Youth Association, led by their President, Nii Ayaafio Tetteh II who requested for financial support for the veteran actor.

“Inspired by your positive impact in the movie and entertainment industry where you distinguished yourself, I have equally decided to support you with a monthly stipend of GHS1,500.00 from my parliamentary salary. I have therefore placed a standing order for the monthly transfers to your account effective September 2021 till the end of my tenure in the Eighth Parliament of the Fourth Republic on 7th January 2025,” he added.