Why Ghanaian super clash must not die

Home   Feature Sport Why Ghanaian super clash must not die

Why Ghanaian super clash must not die 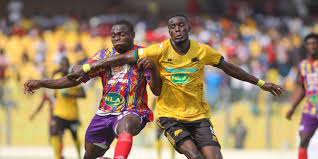 A friday evening came serendipitously. The conditions were rife for the President's cup as a preparation towards 5th Ghana's Independence celebration. This has been advertised for a week or more prior to the game. It was one of the crunch football matches in Ghana. A football match between Accra Hearts Of Oak and Kumasi Asante Kotoko at the Accra Sports Stadium in the presence of the President, His Excellency, Nana Akuffo Addo and his Entourage.

A match of this nature has always presented a variegated reactions in Ghanaian Homes and Families who hitherto has supported either of the teams to the core. It is true that football involves a lot of emotions beyond imagination. I realized this in the early days of the year 2000 when Accra Hearts Oak, the team I am a fan of, played their first continental showpiece--CAF Champions League. At that age, I couldn't make up so much of the things happening in the house but one thing was very clear; the mixed reactions on the face of one of my brothers.

He was an elderly brother of more than 20 years difference between us. He has professed his love and admiration for Kumasi Asante Kotoko and a staunch supporter as well. His facial expression showed that he didn't wan't Accra Hearts Of Oak to lose the match beacuse it was the first time a Ghanaian club will win such a continental showpiece while at the same time he didn't want them to win because it will be Accra Hearts Of Oak winning a trophy that will put them in good standing of history. Such an awkward moment to be a Kotoko fan. However, Accra Hearts Of Oak won the match and was proclaimed the continental showpiece champions.

The fear of my brother has become permanently inscribed in the annals of history as Accra Hearts Of Oak was and is still the only club in Ghana to win two continental showpieces; CAF champions league and CAF Confederation Cup. Ever since, it has become difficult for him to support Accra Hearts Of Oak in matches that doesn't concern the fortunes of his club, Kumasi Asante Kotoko. As Kumasi Asante Kotoko, together with all the other clubs in Ghana still thrive to write their names in the golden book of African elite competitions, the Glorious Accra Hearts Of Oak has earned the Grand title "Masters of the Ghana football.

Fast forward, in 2004, the Confederation of African Football (CAF) created the Confederation Cup as the second most priced championship after the CAF champions league. Its maiden edition saw two great clubs from Ghana surmounted several other clubs across the continent to meet in the final of this newly created second most priced trophy in the continent.

It was an all Ghana affair involving Glorious Phobia and Flourishing Fabulous boys in Ghana. This showdown presents the chance for the Kumasi Champions to triumph over Accra big boys at the continental showpiece. This particular match presents me the chance to watch the game in the room of my brother--the staunch Kotoko fan. The environment, the atmosphere and red-lite floor provided a colored version of the flag of Kumasi Asante Kotoko and the hanging penant of red inscribed porcupine was all that was needed to ascertain his loyalty.

At the blown of the final whistle, the Phobian boys were in full jubilant mood as well as the fans. I was in jubilant mood too. Too excited that I forgot where I was. It took a knock, hard enough, to acclimatise me to the environment once again, which I can still remember and feel on my head from this brother of a Kotoko fan when I shouted that Asante Kotoko was only a local champion while Hearts Of Oak was a global icon to behold.

When I took a bold look on the face of my beloved brother, which was natural after an unexpected knock on my head, which he indeed acted ultravire, submitting to emotions and being sorry for, tears began to pour down his cheeks. He teared not for the knock unleashed on my heard, ofcourse not for the glory of Hearts Of Oak, but for the loss of a global showpiece to non other than their bitterest rival.

Yet at the end, Hearts of Oak was crowned and Kotoko is still yearning for a major honors at the continental space. This was the height of support people give to clubs and football in general exhibited by my brother's emotions. These emotions to a large extent, are unalterable, unnegotiatable, unconditional assurance and unlimited to say the least. Nonetheless, environmental changes, growth and situation can subvert these emotions to tge barest minimum.

In the past two seasons, Ghana, Ghanaians and the world has been blessed with different superclash after a long dormant--a decade long--clash(es) between these two great clubs basically due to the dip in form of the global icon, therein given enough room to the local champions to dominate. The last two seasons has seen a resurgent Phobia leading to a heightened superclashes as Ghanaians were accustomed to in the 2000s. It has been phenomenal, entertaining, emotional provoking and waking of bitter rivalry once again amongst the fans.

The 2022 President's Cup only brought what was missing in the first Premier League superclash between the two clubs in February which was nothing short of but goals. The President's Cup put in the final piece of showpiece. It brought life back to it. However, the emotions once witnessed in the 2000s was not however seen during these matches. Even though glimpses of this is gradually coming back albeit slowed by Covid19, the heavy presence of foreign leagues and emotions largely tied to Football Bets, Ghana Premier league is gaining the trust and patronage it once enjoyed. But I'm afraid my brother's support, loyalty and fanship has deminished.

So many years of being a staunch fan of Kotoko only to have it altered after the President's Cup. My brother has realized that Hearts Of Oak has always been the club to deliver when it matters most. Phobians don't make unnecessary noise outside the field, theirs is on the field and the results has always shown this fact. Phobia is family, a DNA possessed by those who, at best, understand football. Unlike so many Kotoko fans who are reeling under the agony of Patrick Razak, yet are failing to see the need to join the Phobian family, my brother, a once staunch Kotoko fan, who could beat for his club, cried when they lose, has now found solace in the Phobian family.

One thing that one can be sure of in Ghana Premier league irrespective of all the flip-flops is the reactions to superclash of the Glorious Accra Hearts Of Oak and the Fabulous Kumasi Asante Kotoko. Even though the President of the Republic of Ghana isn't a Staunch Hearts Of Oak fan, He handed the trophy to the Hearts of Oak captain with admiration, pride and joy. This, you can trust Hearts of Oak. This is what our anthem says, "be quite and don't be seen." Whenever the Phobians are invited, they come to the party fully prepared.

Whether Fabulous or Phobia, the superclash will always be the ish of Ghana football. Its a rivalry created to last eternity. Ghana football have greatly benefited from this creation and many football fans have also enjoy and will continually enjoy while it last. Emotions have faded, yet emotions have evolved, and new emotions have fostered. Changes have occured, more surprising changes have occurred and will occur. Such is football, more importantly, football in Ghana. This is why superclash must not die. It must live.