"What about our ladies and their veils?" - Social media reacts to GES approval of Rastafarians in schools - GH LENSE
GH LENSE.NET
Live
wb_sunny

"What about our ladies and their veils?" - Social media reacts to GES approval of Rastafarians in schools

Home   General News "What about our ladies and their veils?" - Social media reacts to GES approval of Rastafarians in schools

"What about our ladies and their veils?" - Social media reacts to GES approval of Rastafarians in schools

The Ghana Education Service has directed Achimota Senior High school to approve the admission of Rastafarian boy, Tyrone Iras Marhguy, after denying him because of his dreadlocks.

Reacting to the incident, Ras Mubarak, former MP for Kumbungu said, the school has not only breached the constitution but also "humiliated" the boy based on his "Rasta Culture". Therefore he hope the school will reverse it's decision.

This has sparked controversies among netizens as some are of the view that the school has its governing rules so if anyone wants to keep dreadlocks should go where it is accepted.

Those who disagreed said since it's the Rastafarian belief, the boy should be allowed to school just like students of other faiths as he has freedom to associate with any religion of choice.

In a development, ghlense.net , spotted some points raised from a section of the netizens who believe it's unfair for GES to approve the admission of Rastafarians whereas it did nothing about the issue of female muslim students and their hijab.

" What about our ladies n their veils? Since we are our own enemies, we can’t work towards this goal...but politics di33, we can even die for it.... make we talk aaa, our own people are saying let’s build our Schools...after building the Schools, I’m sure we will b doing the placement ourselves. No matter wat, some people will find themselves in the non Islamic Schools...We are very annoying... This people in less than a week accomplished something... They would hv also told themselves to get a Rastafarian school. Shame on us!💔"

Below are the reactions of others:

Are we guided by the same laws in this country?

GES has directed Achimota school to admit Rastafarians. I don’t really have a problem with that but the same GES has heard of numerous campaigns for the wearing of hijab both in schools and at work places and yet no step has been taken to make the campaigns fruitful.

One  individual who has been influential in the Rastafarian freedom to be in school is Ras Mubarak, fortunately he is a Muslim, it gives us hope that when such individuals and Muslim members of parliament speak on the hijab topic we can be successful.

A wake up call to us.

Big ups to the Rastafatian Council of Ghana. You have indeed demonstrated leadership by winning for your kids the right to go to school in their dreadlocks.

Unfortunately, the leadership of the Muslim community have failed woefully to do same. They are tight lipped on the rights of their kids to go to school in their hijab.

Leadership indeed is by example. 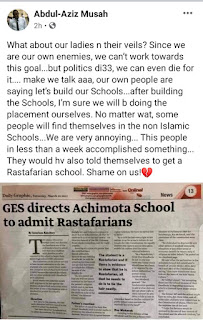 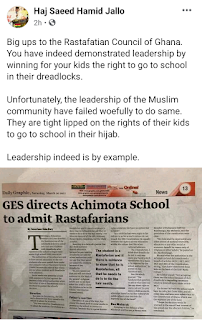 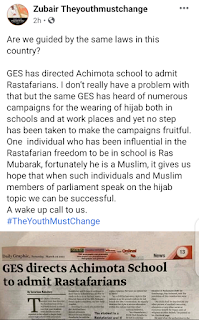