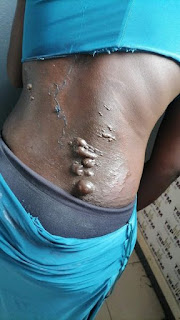 A young woman has poured hot water on her daughter over a missing five cedi note. This unfortunate event happened at Accra Newtown, a suburb in the Greater Accra region on September 23rd 2021.

In a video sighted by ghlense.net, the victim in narrating her ordeal said, she was raised by her grandmother since she was a year old. When she attained 13, the husband of her grandmother died and things became difficult for her grandmother.

The old woman fell ill and the girl's mother came for her. Upon reaching Accra, she was admitted into a a private school. After sometime, the mother said she can no longer afford the fees as the father of the girl isn't sending money. So she took her to a much affordable school.

According to the teenager, she walks from Newtown to Airport Police school, where she was given her second admission. She doesn't buy text books for her too. She is only given two cedis as money for upkeep.

She attends to her mother's shop and so decided to save four cedis in order to buy herself the textbooks needed for school.

The mother got furious. Called her daughter names and even hit her with a mortar pestle while people pleaded with her. The pleas fell on death ears. She on top of it starved her daughter for two weeks. It was as a result the girls took five cedis from the mother's money to buy food that she was burnt with hot water by the mother.

She, the mother, a day prior to the horrific incident, burnt the clothes of her daughter to ashes.

The police have arrested the mother.